At the boundary where the Arda River leaves Bulgaria and rushes towards the Aegean Sea, you’ll find the blooming town of Ivaylovgrad, tucked in the most south-eastern folds of the Rhodope Mountains. Its geographical location – between two countries, between the plain and the mountain, as well as its intricate historical fate-, assigns to this region the share of a “border” point of different cultures, religions, and ethnic traditions. Their interaction has created here a priceless cultural wealth.
Magnificent wine whose taste has assembled the sun and the spirit of Thrace is aging here. It’s not unintentionally that the town’s holiday is February 14, Trifon Zarezan – the day of wine-growers and winemakers. Wine is lauded in the verses of Ivaylo Balabanov, a gifted contemporary poet: “Here, one wouldn’t say ‘Pour me a glass of wine’, one says ‘Pour me a glass of vernal dawn!’”
This southern area keeps a remarkable cultural and historical legacy from the times of the Thracians and the antiquity: the Armira antique villa, the Lutitsa fortress, the Ateren bridge, and dolmens near the Zhelezino and Plavun villages. Originating from the 18th – 19th centuries, several churches, cultural monuments, and architectural and ethnographic complexes (like those in the villages of Mandritsa, Dolno Lukovo and Gorno Lukovo) are preserved.
The place attracts nature lovers, too, with the Hambar Dere, Dupkata, Likanya, and the Byala River Meanders protected areas. The beautiful scenes of nature around the Ivaylovgrad dam on the Arda River captivate whoever opted for visiting this area: an area with fertile soil, enthralling landscapes, dense woods, and hamlets where time has been ostensibly brought to a halt; an area brimming with legends about hayduts, voyvodas, and the famous wine.
The visit of the town could start from the Museum of History, opened since 2009. It puts on display ceramics from an antique villa, coins, parts of a Thracian funeral chariot, artefacts from the Lutitsa and Rodostitsa fortresses and so on. In turn, the reconditioned Revival-period house of Mircho Paskalev, a local wealthy man, is sheltering a rich ethnographic collection.
The most visited and attractive tourist site is the Armira Antique Villa from the 1st – 4th century’s period, 4 km off Ivaylovgrad. The impressive floor plan of the villa, its opulent marble decoration, and the original mosaic floors are categorizing it as a unique specimen of Roman architecture and art on the Balkans, one of global significance.
Not far from the villa is the Great Tumulus near the Svirachi village. Located on top of a tall hill, it is part of the familial necropolis of the ancient estate’s owners. The tumulus is one of Bulgaria’s largest from the Roman epoch. It’s about 60 m in diameter and 18-20 m in height.
Located 6 km away from the town is the Lutitsa medieval fortress – Bulgaria’s best-preserved from that period and one of the largest in the Eastern Rhodope Mountains. It’s known as the Marble City and Kaloyan’s Citadel, and it’s an archaeological monument of culture.
The Rodostitsa fortress is also an exceptionally precious archaeological site due to its deep cultural layer, in which evidences of 900 years of inhabitation in this location have been discovered. The walls built from hewn stone are 2 m thick. Here, in addition to Trifon Zarezan, every year at the end of the winter or in early spring – when the Butter Week (Mardi Gras) Christian holiday is observed, Kukerovden (kukeri carnival) is celebrated. Another cultural event of great importance in the region is the Ilieva Niva National Youth Convocation, also known as the Day of the Thracian Child. It’s organized in memory of the 200 children of Thracian refugees who perished in 1913. 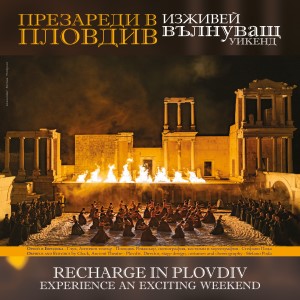