Veliki Preslav is captivating with its rich history and fascinating nature

“Swaying in millennial glory, the Great Preslav is shining today!” as per the town’s anthem
A major characteristic of the Veliki Preslav municipality is beautiful and clean nature combined with a rich cultural and historical heritage. Picturesque locations and numerous archaeological artefacts attract to it fans of cognitive tourism.
The contemporary town is 3 km away from the Old Bulgarian capital, 20 km to the region’s administrative centre, Shumen, and 370 km to Sofia.
The old city is at the feet of the Preslavska Mountain. These fertile areas have been inhabited since remote antiquity. Around the beginning of the 9th century, the erection of a fortified settlement began. Once Christianity was imposed as an official religion, Preslav became the capital of Christian Bulgaria in 893. The fate of the new faith was entrusted to Prince Simeon – “The Great among Kings”. Within the next 80 years, the city turned into a centre of politics and diplomatic relations, of artistic trades and architecture, of active literary and educational activity.
Today, the “Veliki Preslav” National Historical and Archaeological Reserve includes restored and preserved parts of the excavations in the medieval city. Museum funds are harbouring 35,000 objects, of which 1,700 are on display in the exhibition section. The museum’s collections are illustrating in the most exhaustive way the phenomenon of the “Golden Age” (the one of Tsar Simeon). Tourists can admire the Preslav Gold Trove and many more pieces of jewellery made by skilful masters. There are superb examples of painted ceramics from Preslav, table plates, decorative tiles and architectural details, and unique ceramics icons, the most famous among which is the one of St. Theodore Stratelates, which was discovered in the “Patleyna” area. Original Cyrillic, Glagolitic, and Greek inscriptions from the 10th-11th century can be seen in the museum’s collection. The Byzantine seals collection (971-1088) is the largest in the world. Words are not enough to describe what has subsisted from among the beautifully sculpted stone details, which corroborate the picture reported by John Exarch: “…palaces high and churches exceedingly decorated with stone and wood, and colours, while at the inside – with marble and copper, silver and gold.”
Regarding the natural features of the Preslav area, Ivan Vazov said at the time of his visit, in 1902: “See how our tsars, Boris I and Simeon, had a hunch about natural beauties and solid strategic knowledge that led them to build here their capital. Abundant water, a natural shield from evil winds and foes, fertile soil. Splendid nature. You, Preslav dwellers, are unimpressed with that, you’ve grown here, but it’s not like that for others.”
After the tense daily routine, the Patleyna Reserve would grant you quietude. It encloses the Balkan’s largest woodland of wild carob trees, a species on the Red Book. In springtime, the meadows blooming with yellow tulips, also a protected species, are a pleasure to the eyes. Here, amid incredibly gorgeous nature, is the site of the St. Panteleimon Monastery complex, where the disciples of the brothers Cyril and Methodius had worked. The well-kept Dervisha Reserve is located on both banks of the Dervishka River’s stream, 3 km away from the town of Veliki Preslav. It was declared protected area to preserve Bulgaria’s only natural habitat of the horse chestnut tree species. Trekking fans can discover the beauties of the Preslavska Mountain along seven marked tourist itineraries.
Today, three churches are in use in Veliki Preslav. The St. Archangel Michael temple and the 200-years old SS. Peter and Paul church are located in the town’s centre. The SS. Cyril and Methodius temple-monument is located within the boundaries of the Old City.
Lots of beauty and a waft from the Golden Age are expecting you in Veliki Preslav. Come to touch the magic and the greatness of Simeon’s capital! Make yourself a gift with this experience! 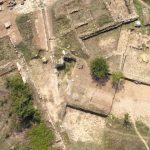 « Vidin: a strong fort on the Danube’s bank
His excellency Dr. Klaus Fabian – The ambassador of Austria to Bulgaria – “The stability of a country is of great importance in view of its strong presence in the EU” »