In Bussintsi, the traditions of pottery are revered

The Bussinska Keramika ethnographic museum in the village of Bussintsi, Tran municipality, is one of the most important centres of traditional pottery in Bulgaria and is the cradle of the famous Ceramic School of Bussintsi whose roots go far back in time. During the Revival period, the craft turned into the main source of livelihood for the village, reaching a real bloom by the late 18th and especially during the 19th century. Then, there were more than 300 workshops and a whole industry developed. Affiliate centres spawned around: Samokov, Berkovitsa, Razlog, Nevrokop, and so on.
The museum was built in 1978-1983 in order to preserve and popularize the rich cultural heritage of the Bussintsi village. Planned as an original ethnographic complex with a museum and a creative facility for artists, it includes an ethnographic exhibition, a demonstrational ceramics atelier, a restored traditional house, and an inn section. The ethnographic exhibition occupies two rooms where more than 200 original pieces can be seen – including both Bussintsi ceramics made by old masters and contemporary potteryware inspired by traditions. The pottery shop has a cave for clay de-airing and wedging, a potter’s wheel, an old kiln, and a glaze-grinding stone.
The museum’s opening hours are Wednesday through Sunday from 8:30 to 17:00.
The same working time applies to another interesting museum on municipal territory – the one of yoghurt. It’s located in the village of Studen Izvor, about 7 km off Tran. The museum is dedicated to Dr Stamen Grigorov, a Bulgarian scientist of international renown and local native. He first identified the agent causing the fermentation of milk. The finding met considerable interest from the then scientific community and the bacterium was called Lactobacillus bulgaricus, in homage of the scientist and his homeland. Visitors may learn about the natural and cultural specifics of the region and of the local lifestyle; about Dr Stamen Grigorov’s deeds and life; about the history of yoghurt – from the homemade fermentation to today’s state-of-the-art technologies and the European production standards; about its important role in human nutrition and its probiotic properties applied in the prevention and the treatment of various illnesses, including tumours, etc.
A key factor for the development of tourism in the Tran municipality is one incredible natural attraction – the Erma River Gorge (a.k.a. the Transko or the Lomnishko Gorge). It was declared as such with the objective to preserve the natural ecosystems, the variety of species, the habitats of rare and endangered species and communities, and the singular and remarkable landscapes and lifeless nature objects.
The Tran eco-path is one of Bulgaria’s first; it belongs to the Bulgarian Eco-paths national network. It is 13.2 km long and covers the most attractive sectors of the gorges of the rivers Erma and Yablanitsa, as well as other nature splendours. It consists of a system of circular itineraries of different lengths and difficulty levels, any one offering the possibility to observe an impressive diversity of terrain and a great variety of plant and animal life.
Another local landmark is the St Petka rock church, about a kilometre away from Tran’s centre. It is declared an archaeological monument of culture. It has been a religious centre since the times of the Second Bulgarian Empire until today and is closely linked to the legend about the patron of Tran and the area – St Petka Bulgarska. The water oozing from the rock is thought to be the saint’s tears. This water is collected in clay cups and is presumably curing eye diseases. As per a superstition, whoever suffers from some ailment would get all right after sleeping over at the chapel.

« Gergyovden – the Day of Valiance
“I am simply amazed by the beauty this country offers” – Stavros Avgoustides,Chargé d’Affaires a.i. Embassy of the Republic of Cyprus » 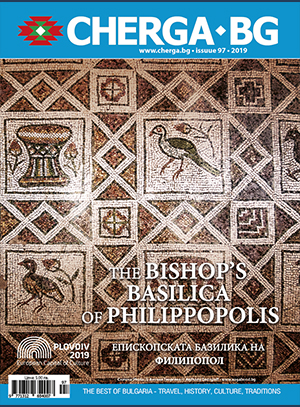