Staro Stefanovo – a tale of the past You often dream that in the real life such places exist on the background of which the action in your favorite films develops. And while you are convinced that these are just the sets, you pass the consecutive turn and fall into the very center of the village of Staro Stefanovo. Even if you do not assume that for a little more than two kilometers after a road fork for the popular mountain resort Apriltsi you will see something quite familiar. And where do you know it from? In your memories appears an episode of the popular serial Wolf-hunt, by the novel of Ivaylo Petrov and an unforgettable scene from the film “Beyond the line”. There is no mistake. The two loved Bulgarian films have been shot in the architectural reserve Staro Stefanovo
One may say that this paradise place of nature in the heart of the Balkan mountain is “open” to the world most of film directors and actors. The unchanged village pub is in the surrounded by whitewashed houses village square. The walls inside are full with funny jokes and folklore, written both by the greatest names of the Bulgarian cinema, and by usual visitors-tourists. Everything so far makes you feel at the same time as a discoverer and a participant in a film. The village was declared an architectural reserve in 1983. The preserved about one hundred houses dating from XIX century are typical models of the Balkan architecture. They have a solid ground part built from stone and second floor, whose structure is made from wood. The houses’ roofs have the special stone plates called “tigli”. On the first floor were the workshops and shops, and on the second one – the residential rooms, tells Elena Georgieva, curator in the department of “Ethnography” to the Regional Historical Museum, the town of Lovech. The French-fashions with floral motives on some of the houses are unusual for this region. They are painted by the Tryavna master Gencho Kanchev who lived in the village until 1920. The houses of the local people are strung around the little stone streets, which reminds of the cold winters here, and get together in the village square. A chronicle in 1515 tells about the settlement at the foot of the Mikrinski heights under the top of Maragidik. At that time its name was Isvote. One can be sure today that it is the oldest name in the whole region. To the north of it there are remains of a Roman fortress. The village legends tell about a terrible plague which was stalking during the twenties of ХIХ c. Then, in order to survive and save their village, the people moved it to in a secluded place between the gullies of two streams. Since then it has been known with the name Vratsa. Its residents helped the teams of horses or oxen to pass through the mountain, due to which they were granted administrative privileges and their taxes were reduced in half. Today the village consists of two parts – old and new. Staro Stefanovo is in fact the architectural reserve. When at one time the terrain became insufficient for construction, the expansion crossed the other side of the road and there its new part differentiated, which more populated today.
It is a real fortune that Staro Stefanovo has managed to preserve its atmosphere. The nature here also radiates peculiar coziness with its abundance of flowers and herbs at any time of the year. And it seems that silence dominates over everything. The local people even joke that the only thing which may befall tourists, if they spend some time in Staro Stefanovo, is to have headache caused by …the silence.
And if you ask about the local sight, you will be directed immediately to the church. Its name is “Birth of the Most Holy Virgin Mary” built with two domes and a solid stone form by Master Gencho Kanchev, with steady columns in the middle and vaulted windows. In 1864 a royal decree permitted its construction, and nine years later its first stone was laid by the bishop Dionisiy. Ten years ago the abbot of the Troyan monastery Father David had already established a monastery school in the village near the church. The church was built completely in 1884, and three years later the altar was decorated. It is of the so called “white churches” whose vaults are not painted. This is the biggest church from Lovech to the Troyan monastery, affirms the chairman of the church board. The icons in it were donated by the local population. An old gun has found its place in the churchyard in patriarchal peace and greenery. With its muzzle lapsed into silence it is just one wonderful soldier monument – homage to the local people who were killed during the wars.
No hotels have been built yet in Staro Stefanovo. If you find accommodation, it will be in private houses. That is why the visit may be a pleasant addition to a weekend in the Troyan monastery, Apriltsi or Lovech. 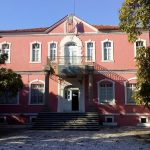 « The Klisura Monastery – between Heavens and Earth
“My songs are my life!” »