THE EMBROIDERIES – A THREAD BETWEEN ANTIQUITY AND SCIENCE

Is it possible that embroideries affect our health? The answer to this questions is given to us by the latest achievements of modern science, which prove, that every symbols, embroidered, woven, drawn or stamped on our clothes, affects the one who wears it and his surroundings. The images, with which we decorate ourselves, have a verbal equivalent in the human consciousness (logos). Observing and contemplating them has a direct effect on the psyche, the physical health and the mental balance. 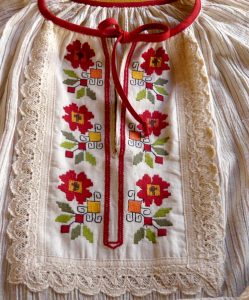 „The embroideries in themselves represent complex combinations of geometrical forms, each of which generates a field. Upon focusing the mind on them, we amass them as parts of our energy field. This way, purely on a energy level “we give” life to the em- broidery and we activate the code hidden in it. – writes V. Vladimirova. She says: „By the weaving of the cloth, the sewing and mostly the embroidering, a woman has placed her energy in each element of the garments. Creating a field and using it to charge the garment, the Bulgarian woman bestowed upon it her artistic energy. By willingly observing an image or wearing it, we begin to ingrain it in our memory and with that we recreate it, realizing it in our lives. The mutual element in weaving, decorating, embroidering or imprinting is the human imagination – realizing and recreating the world in images. In their overlapping in time and through generations, “archetypes”, also depicted by Carl Jung – the founder of analytic psychology, were developed. These are images, signs and symbols in the collective unconscious, often called “collective” or “birth” memory. It is under this mechanism, that signs and symbols turn into a mighty tool for governing the world.

Our ancestors and past generations believed in the mutual bond between the spirit, which we carry inside ourselves and the outer world. Therefore, just like our identity finds adequate form in our clothing, the symbols and signs placed on our clothes attract different powers to our life. The connection with them provokes changes within us and in the surrounding world. For centuries science has searched for new and new methods to examine their behaviour. A great opportunity for quantitative measuring of the effect of an object from the outside world – a painting, music, a flower, media, an embroidery or anything else on humans, is provided to us by a device, functioning on the basis of analysis of the links in the molecules of water. It was invented and patented by a Bulgarian team led by prof. Anton Antonov – Director of the Centre for research of biophysical occurrences in man in the South west university of Blagoevgrad and prof. Zhivko Zhelev, who for decades has been constantly wearing shirts with folk motifs, because he is convinced that they healed and preserved the balance in his physical body. Here is how he explains the facts:„ Our bodies are structured by water, which not only has the quality to memorise and carry energy information, to contain DNA through the protecting hydrate layers around it, but also to connect one with the surrounding world by using the parallel nervous system that it forms. This nervous system perceives and conducts all the information from the environment that surrounds us, no matter if we are conscious of the perception or not. For example, hidden images, mental and electromagnetic pollution, non-verbal communication etc. have an effect on our mental and physical health, no matter if we are conscious of it or not. They change the arrangement of the water structures in the contents of our bodies. If this arrangement is led by sacred symbols like the ones present on traditional embroideries, it turns into a catalyst of the divine physical and chemical process. “The water content just in our brain is over 85%!… This way the embroideries on shirts, vests, tunics, sleeveless dresses, aprons and other elements of apparel and daily life take to their protective and symbolic role. For example, the embroidery of the shirts around the neck and the bosoms is connected with energetics of the thyroid, passing through the thymus and the pancreas, protecting the person.

The choice of colour is also very important. There are 3 main colours for the Bulgarian embroidery: white, red and black, which were the main colours of the Bulgarian flag. The shirts of our national costumes are always in white. The white colour has the highest length of waves, it serves as a projection on the outer world as well as on the person who is wearing it. Therefore, the colour of the clothes and the embroideries placed on them, are connected by stimulating different energy centres and emotions.

This is how they influence the state of our health and psyche. It turns out, that our ancestors achieved knowledge and wisdom through their connection with God. They passed it on through the signs and the symbols, they encoded the information in the embroideries. Today we are rediscovering them through modern science, in order for them to connect us to The Truth and return to our lives.