Maestro, in late September 2009, we were fortunate to hear your virtuoso performance of Max Bruch’s g moll concerto with the Shumen State Philharmonics. Thank you for the experience, and let’s start with this: You’re not a hereditary musician. What importance does the familial background have for a young talent?

Your information is somewhat inaccurate. My parents were not professional musicians, yet my grandparents met at a soiree where they competed playing the guitar. My grandpa played the guitar, the mandolin, and the violin. He personally handcrafted my first violin for my second birthday. My father played wonderfully. However, “A fiddler won’t feed a home”, as the saying was going at that time, and he was steered to the more secure physician’s profession. Nonetheless, he was taking every opportunity to play. My sister, a pianist, became professional, her daughter is a contrabassist, my son is a very successful violinist. One generation before us, making music was so popular; why is it no more like then?
It’s very simple, infinitely simple: We’re living in a pragmatic period. Few are the parents, realizing what it is to become a musician– how many hours a day should you play, without absolute certainty about your prosperity as a professional musician (because you may well not arrive at that)– who are steering their children in that direction.
I mean, learning an instrument like cello, piano, whatever, starts at age 4. At 24, you may have a diploma or two in your pocket. So what? You may find yourself on the street, without the slightest chance to become an accomplished musician! What I’m saying is about Europe, not only Bulgaria. No borders anymore: anyone from anywhere could get his little violin and go seek his luck. When a vacancy arises at a good symphony orchestra, hundreds of candidates show up. This is why I’m saying that there’s no– absolutely no– certainty that you’d put so much effort, so many hours of daily work, and you’d fetch some value. Because of this pragmatism and the insecurity, indeed, I couldn’t blame anyone. I’m very hopeful that at least musician’s families will train their kids (something that actually happens) to maintain the tradition and to keep this artistic avocation.

It’s well known that you have a great, maybe decisive contribution to the development of Mila Georgieva’s talent.
You know, it’s not for Mila Georgieva’s talent only. Albena Danailova’s, too?
Now, this is a bouquet of flowers. The most enchanting flowers one can imagine! Each one is so entrancing and powerful that you only could extol and applaud: This makes me so terrifically happy! True, Mila was among the first little children with whom I played at Bulgaria Hall. We had a very intense period of collaboration. I had invited her to Romania for a joint performance with the Bucharest Philharmonics, etc. Yet many young performers made trails home. Totally unofficially– I could say that I never took a penny from anyone for my help. Those were Vasko Vassilev, Vesko Panteleev, and Svetlin Roussev, and Albena, too. Many of them only attended master classes, but there was a group that knew better than me how much was my flight delayed: “Let’s call, to save time”! (laughter) At some point (and by family tradition, too), I found a sense in giving help and it happened that, as corroborated by the results, those whom I helped have not been wasted. I just opened a little their horizons, and I was giving from what I had the luck to learn– for you couldn’t become a violinist by the books!
I’ve been telling to myself that parenthood is the human activity that’s the closest to divine ones– because it creates a human from “something” almost inanimate. A person is created from a very animated something! What’s more soulful than love between two human beings! It’s from there than human inception comes, in my, and not only my, opinion. Well, the Bible says it’s from clay! Well, I’m going a bit farther! We’ve washed ourselves down a bit, no more clay. Yes, the domestic environment is terribly important. Some are saying that the education of a child starts as early as in the mother’s womb. Experiments have demonstrated that newborns calmed down when listening to Mozart’s 40th symphony. This didn’t surprise me at all: it made me glad, because classical music is providing something that not all music gives.
Perhaps everyone among us must pay a bit more attention to education, because the street teaches many things. If you make a pros and cons list, I couldn’t guess which column would have more items. If there’s no strong education, providing a stable foundation, the young person is very frail, very susceptible, and things can easily get warped and fatal consequences may occur. Let alone drugs, so many other wrongdoings, the aggressiveness.The worst one might find around the world, we already have at home.
What I always thought is that you should be intelligent enough to orient kids towards painting, theatre, music, sports, some activity that would fill this free time. They’d have less time left for stupidities!

It’s true, there’s one principal, Milka Miteva, who makes it somehow to free a little more room for playing the instrument, for the most talented students, but this is a case of in-house organization. Still, when, on an equal foot with any other high school, the young musicians have to pass graduation exams– what happens then?
The Bulgarian singers– at least those from the former generation– earned worldwide fame, yet I wouldn’t say that remarkable violinists like you, Iosif Radionov or Vesko Panteleev have the same popularity– in terms of recordings, audio clips on the internet, etc. Is this true? It’s true. A prima vista, but only at sight reading. Such celebrities like Boris Christoff, Ghiaurov and Ghena Dimitrova. Fortunately, we still have such opera divas alive: Raina Kabaivanska or Anna Tomowa-Sintow! It’s so in the near past, but now, too, we do have such: suffice to mention a single name, without underestimating all the others– Vesselina Kasarova, who’s simply an astounding singer, for me and not only me!
Let’s begin from the beginning: why is it so happening? An initial potential gets revealed in the milieu of music and art directors of world renown. It didn’t turn out this way for us, for many reasons. First, operatic art is much more popular, more sought after, more moving. Scenic? Of course: you have a stage, theater, ballet, orchestra, music, you have all! Stage sets, you name it. And, moreover, opera’s shifting in a slightly commercial direction: look at what Anna Netrebko is doing. She’s a good singer but that’s a show! Absolutely, but there are also many among the classical violinists who’re attempting to do that.

Nigel Kennedy?
Leave Nigel Kennedy alone! Nigel Kennedy is a boy of genius for me! He was a genius even when he was only a boy; he later did fantastic things as a classical violinist, as a jazz violinist. Just a musician who, in my opinion, has no equal, with his field of expression and with his achievements. He discovered all these provocative moments in his career– through his conduct, through the manner of upsetting all those in tailcoats and bow ties and reaching to a young audience. Come see him play at (the Royal) Albert Hall, when ten thousands people are giving him a standing ovation at the top of their voices! Indeed, you can only say “Nigel, I’m only too happy to know you and to be your friend!” What we mean is about something else, about some lesser other -Vanessa–Mae, who entered that groove and Vasko Vassilev decided that he, too, could make some similar things. With time, I’m more and more positive that covering all potential fields of expression at a very high level, optimally, is unachievable. No way, you’ll slump somewhere! It will always be a thing not as you expected it. I believe that we’re drawing closer to narrower specialization in a specific repertoire. 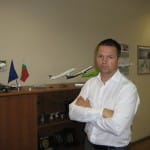 “Aviation goes out of the crisis”, says Kamen Kichev