A Celtic Sanctuary was Found in Bulgaria 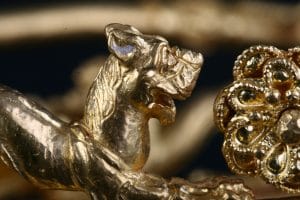 Prof. Diana Gergova, one of the most prominent Bulgarian Thracologists, with over two hundred scientific publications, is a longtime leader of the excavations in the village of Sboryanovo where recently were discovered mysterious Celtic items. Especially for the readers of “Cherga” the famous archaeologist reveals the mysteries of Celtic presence in Bulgaria.

When in 1982 archaeologists led by Prof. Gergova began methodically exploring the area, everything for them was new, unknown, with awaiting answers to their many questions. The very name of the place “Sboryanovo” testifies to its character of a meeting place of gods and men that was to be proven later on. 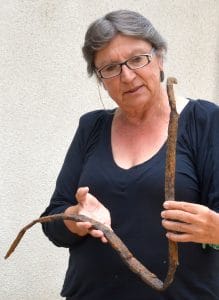 Today, Prof. Gergova is proud of her findings that justify her expectations and even exceed them. The remains of the spiritual and political capital of the Thracian tribe Getaecalled “Dausdava” (City of wolves) and also Helis, dating back to 1st mil. BC, have been discovered. It is unique of its kind complex of shrines and cult places, planned with scope, big not only for Bulgaria and it is in the spirit of the Orphic doctrine of harmony with nature.

The most notable and visible monuments – mounds erected by the Getae to mirror the constellations Canis Major, Orion, Sagittarius, etc., are vivid proof of the high level of the Thracian civilization, for their knowledge of astronomy, mathematics, and their belief in immortality of the soul. In the mounds were found sensational artefacts and funerals of two of the most famous Geticrulers –Kotela (4th c. BC), ally and father in law of Philip II of Macedonia and Dromihet (3rd c. BC), the victor of the Macedonian successor of Alexander the Great.

Most impressive worldwide, however, are the recent discoveries of Prof. Gergova associated with the Celtic presence in the Balkans, for which she says she turned the perceptions of Europe’s past because they shed new light on the Thracian-Celtic relations. 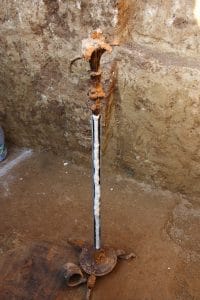 In the group of mounds associated with funeral Getic ruler Kotela, the team of prof. Gergova discovered the first Celtic sanctuary in the territory of Thrace. In it they found not only а bent Thracian iron sword – Romfea, but also an iron buckle from Celtic warrior’s costume. Not far from there, in an adjacent mound related to the funeral ceremonies of Kotela, back in 2013 was discovered the first Biga – buggy in the Balkans, which is undoubtedly Celtic – with many similarfound in Nanterre, near Paris, and in general in the Celtic world.

According to prof. Gergova “traditional view is that Celtic invasions in the Balkans were a destructive force and triggered dramatic changes in the political history of Thrace. The new findings, however, show a different nature
of relations between the two ancient peoples. They clearly show that newcomers Celts were integrated in the Thracian environment, probably due to exogamy marriages, Celtic women would marry Getae. Indeed Justin, retelling the story to Pompeus Trogus, writes: “the Gauls, whose population was so numerous that their land could not accommodate them, sent, as if by the custom of sacred spring, three hundred thousand people to seek for new places to settle. “It is known that they sent a delegation to Alexander the Great, but apparently negotiated also with Getae themselves.”

The presence of Celtic sanctuary in Thrace also testifies to similar beliefs and rituals in the two nations. Prof. Gergova reminded that “according to ancient authors Celtic Druids became aware of the teaching of immortality not by someone else, but namely by Getic king, priest and god Zalmoxis”. According to our renowned archaeologist, Zalmoxis is even more interesting than Orpheus. It is believed he was in Egypt, like Orpheus, and that he was Pythagoras’ predecessor. His semi-mythical figureis an express of a very ancient and strong tradition of knowledge and spirituality.” 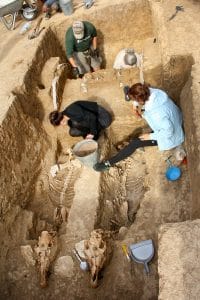 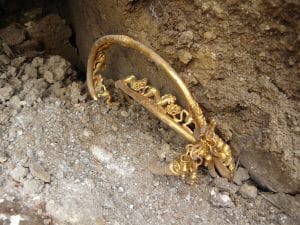 The discovery of sanctuaries, places of worship and alsothe living traditions in Northern France, Denmark, southern England, suggest that “interactions in the field of beliefs and practices between Getic lands and European North have been extremely intense yet in 1st mil. BC”. New excavations and surveys in the necropolis near the village of Sboryanovo and possibly at other places around Bulgaria will give us a clearer idea of the Celtic presence in our lands.