His Excellency Djan Wansue, Ambassador of China in Bulgaria: „Bulgaria is an earth Eden and favourite place for the tourists” Your Excellency, since November 2007 you have been an ambassador of China in Bulgaria. What kind of success you can boast about regarding this comparatively short period of your stay here?

I have been a lot of years in Bulgaria – studying, working. Now when I am already here as an ambassador, I feel greater responsibility and I make maximum efforts for the profound development of bilateral relations regarding different spheres.
There are traditionally good relations between our peoples. The visit of Mr. Hua Dzienmin, a member of the State Council of China in January this year set up a good beginning for new contacts favourable for both parties. Later in the same reference, our country was visited by a number of other Chinese managerial figures.
At specially organized business forum between province Djadzyan and region Varna five Chinese enterprises signed contracts with Bulgarian partners for 28 million USD. The exchange and practical cooperation between both countries are successful with regard to different spheres – economics, culture, military science, science and technologies etc. I hope that through my efforts as well as these ones of my colleague we will provide a possibility at the disposal of Bulgarian people in order to get to know China in details and objectively.

What are your priorities regarding work?? As I already mentioned my work is orientated predominantly to a direction of stable development of Bulgarian-Chinese relations. We are striving to encourage actively the contacts between both countries regarding different spheres and at different levels, to strengthen the mutual political trust between them, to proceed bilateral contacts and practical collaboration. Both countries will only benefit by this. Besides having in mind the enormous geographical distance, the differences between us regarding history, culture, everyday life and manners, we are going to activate our efforts in order to show multilaterally before the Bulgarian society the Chinese history, culture, ethnos, achievements of the economic and social development as well as the position of China regarding important international and regional issues. Along with this we are going to present also Bulgaria to China in order to enlarge the getting to know process and trust between our countries and peoples.

On August 8th in Pekin the ХХІХ Olympic Games are going to start. What are you doing in the embassy in reference to this significant event?

China is an ancient country with a history of 5000 years and brilliant and original civilization.
The management of the Olympic Games has always been a dream of generations of Chinese. We hope that through their proceeding we are going to strengthen the friendship and collaboration between the peoples all over the world. We expect that they will be remarkable for their specifics, to pass at a high level so that the sportsmen as well as people around the world to be satisfied. At the moment all stadiums for the Olympic Games in Pekin are already built /N.A. the interview was proceeded at the end of July/. The whole Chinese people gives its contribution in order to provide best conditions for proceeding of the games. Over million and one thousand people are the applicants for volunteers during the sports event. 16th General Assembly Of The Association Of National Olympic Committees (GAANO) announced that it is pleased of what was done on behalf of China regarding the games. The Olympic Committees of 205 countries and regions are unanimous regarding their support of the Olympic Games in Pekin.
On the eve of the Olympiad here in Bulgaria we cooperate with whatever we can – give useful information for the Bulgarian sportsmen, journalists and ordinary citizens who will visit China during this period.

I use this case to wish your sportsmen great success at the games in Pekin. Regarding worldwide importance China is one of the countries with most rapidly developing economy. How would you comment and estimate the development of Bulgarian-Chinese relations during the recent years?
Bulgaria is the second country in the world that has acknowledged the Chinese National Republic. During more than half a century that passed the friendship between us surmounted the test of time and it is getting stronger. During the last years the development of bilateral relations has been getting more and more dynamic and positive. The managers at the highest level keep up and maintain intensive dialogue. The membership of Bulgaria in EU also establishes a new platform for collaboration and contacts between China and Bulgaria. Next year we are going to celebrate 60th anniversary from the establishment of diplomatic relations between China and Bulgaria. At that time along with the Bulgarian country we envisage a lot of festive initiatives.

Several words for the trade exchange of goods between the countries?

Lately the trade-economical cooperation between our countries is going deeper all the time. The bilateral exchange of goods is increasing steadily and during the last year it reached up to 968 million USD.
The Chinese country is going to continue undertaking of active measures for improvement of the bilateral trade. It is going to encourage the Chinese enterprises to invest in Bulgaria and to increase the import from Bulgaria. Bulgarian enterprises are going to be invited to take part in different exhibitions and fairs in China. It is delightful that the export of Bulgaria for China during the previous year was increased up to 90% in comparison with the year 2006 and it exceeded the level of the import from China. After the entering of your country in EU the investment situation in Bulgaria is improving all the time. It is gradually turning into a gate for entering of Asian enterprises at the big European market and that will attract more and more Chinese enterprises to invest in Bulgaria. I am sure that there is a great potential and space for development of trade-economic cooperation between Bulgaria and China.

What is the thing that most greatly impresses you in Bulgaria? What is the difference between our peoples?

The nature and people of Bulgaria have impressed me greatly. Bulgaria became famous as „earth Eden” and with its splendid forests, charming Black Sea coast, numerous historical and cultural sights is a favourite place of guests and tourists. The Bulgarian people are hospitable, well disposed, optimistic, tolerant and because of this the foreigners here feel the way they feel at their homes.
China and Bulgaria are situated at different continents, there are huge geographical distance between them, there are differences regarding history, culture, religion, everyday life but namely because of this the world is so variegated and checkered. Both countries have long history, brilliant civilization, hard-working, brave and good people who share the same or similar opinions regarding a number of issues and they wish to contribute to the world peace and development.

What do you think – is it easy to learn Bulgarian? Do you have Bulgarian friends?

The Bulgarian and Chinese language are in different language groups and are completely different regarding phonetics, grammar, writing etc. This makes them rather difficult for learning. However an old Chinese saying says: „The one, who has will, will succeed”. Even though by means of numerous efforts the Bulgarian language can be learnt. The mastering of this language will be a great advantage for people like us who has been working continuously in your country. I have a lot of Bulgarian friends who make my life here much nicer and more pleasant.

How do you imagine your work and your stay here during the following 3 years?

At present the world is undergoing deep changes. The presence of different problems brings new opportunities and challenges in international relations. As an ambassador of CNR in Bulgaria I am going to make efforts for strengthening of mutual political trust between our countries, for stimulating the cooperation between them, for deepening of friendship between our peoples.
I would like to visit and get to know more places in your country, to study the possibilities for collaboration at a local level. Moreover we envisage to build a new embassy. I hope that this will happen during my mandate.

Your wishes regarding our readers?

I wish the readers of magazine „Cherga BG” greater interest in China provoked by this interview so that they become bearers of Bulgarian-Chinese friendship.

„It is better to see once than hear one hundred times.” China, opened for the world, welcomes its Bulgarian friends to go there – on an excursion, training, work, business and thus to see with their own eyes and get to know contemporary China. 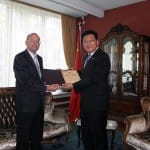 « “I am simply amazed by the beauty this country offers” – Stavros Avgoustides,Chargé d’Affaires a.i. Embassy of the Republic of Cyprus
The ambassador of Portugal: Mario Jesus Dos Santos: “What I Like yo the most in Bulgaria are the people – opened, cordial, hospitable” »