They’re probably the accessories of the Bulgarian folk costume that are the most sophisticated to make
Belts are an important component of the Bulgarian folk costume. They’re needed not only to affix the garments and to keep the body fastened and warm but have also a decorative function. They appeared on our lands since the 8th-9th century CE. Those that can now be found and seen in the antiques shops and the museums are dated from the late 19th‑ early 20th centuries.
In Bulgaria, woven belts were made as presents from the bride to the groom, the best man, the groom’s brother, and the in-laws. On the wedding day, they were worn over the shoulder. Later on, on holidays, they were worn by men and women alike girthed around the waist. Some of the belts had the names of the newly wed woven.
Belts are probably the accessories of the Bulgarian folk costume that are the most sophisticated to make. They’re woven by means of thin square boards and a wooden knife. The boards, or as they’re better known at home ‑ the “bark pads”, have at each corner a small hole through which the warp’s thread is strung. The warp is tensioned together with the boards between the ends of a wooden arc or, in recent times, on a specially made loom. Depending on the width of the belt, the number of the boards varies. The yarn of the weft is inserted and twisted around the threads of the warp, and then it’s battened with the knife, which in this case plays the role of a reed. In most cases, the warp and the weft consist of woolen yarn. The width of the belts is 5 to 10 cm, and their length ‑ 2 to 3 m. They’re always terminated with fringes or tassels. The ends are often much more exquisite than the belt itself and are made with much attention to detail. The complexity of weaving consists in the calculation of the interweaving of the warp and the weft in order to obtain the desired ornament, which is in most cases geometric.
Belts woven on bark pads are widespread mostly in the regions of Sofia, Pleven, Svishtov, Nikopol, Lovech, Sevlievo, and Shumen. Belts from the vicinity of Sofia are featuring brighter and lighter colors, while Northern Bulgaria belts are predominantly darker. Although every region is characterized by a distinct color range and ornamentation, each particular belt is different and unique depending upon the skill and the aesthetic views of its maker. Nowadays, belts from different regions of Bulgaria are still available but unfortunately, the craftsmanship is already lost.
There are belt collectors but not many. Thus, prices for this extremely complex and labor-intensive product are still very low. On the antiques market in this country, belts priced in the range of BGN 20 to 150 can be found, depending upon design sophistication, rarity, quality, or the level of preservation. For now, prices are low because few know how much labor and skill are required for making a belt.
This article was written by Vessela Tomalevska and Kiril Kiriakov, publishers of “Antiques Yearly”‑ the publication about Bulgarian antiques. 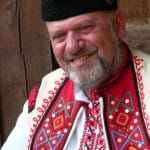 « Maestro Nicola Ghiuselev in a new role
The ambassador of Great Britain in our country His Excellency Steve Williams:“Bulgaria is a wonderful country which has to be seen closer.” »