The Klisura Monastery – between Heavens and Earth One of the most beautiful Bulgarian monasteries – the Klisura monastery, rises just 80 km away to the north of Sofia. The road to the monastery passes through the village of Gintsi and the Petrohan passage (1444 m), as the Barzia town is less than an hour away. After about 3 km is the road fork for Varshets. Another 5 km ahead and you get on the way to the Klisura monastery. While being deep in the lovely scenery around and you are already there!
Situated in the Western Balkan Mountain, between the towns Varshets and Berkovitsa, the holy cloister gathers mainly pilgrims, looking for piece and tranquillity and the people loving nature too.

Near the monastery there is a 100-year old beech tree forest, inhabited by over 280 species of vertebrates, of which 200 bird species. Because of them dozens of ornithologists visit the place and of you are equipped with good photographer devices you could see this fantastic bird kingdom. The most interesting are the rare and protected couple of Egypt vulture, the Saker Falcon, the Lesser Kestrel, the Goshawk, the Lesser Spotted Eagle and the Hazel Grouse. The vicinity of the monastery will allow you to enjoy also sweetsinging larks, nightingales, orioles, thrushes and titmouses. The Klisura monastery is located at the altitude of 500 m, at the foot of the Todorini kukli summit (1874 m). The fans of the mountain march could also use the local advantages and to climb to the top. There amazing scenery opens – to the north are the towns and small villages in the monastery region – Berkovitsa, Montana, Barzia, Varshets, Spanchevtsi, Tsvetkova bara, Yagodovo and Slatina, to the east are the sloped of the Balkan Mountain, to the south – Vitosha and Rila Mountains.
Besides the beauty and the pure air, the Klisura monastery impresses with its long history, full of number of tragic but spirit raising events. In the past it used to be one of the centers for the development of the Bulgarian education and literature, for establishing the Christianity and the Bulgarian nationality.
Built in the distant 1240, in the years of the Ottoman yoke the monastery was devastated dozens of times. A legend tells that during the Chiprovo uprising (1688) the monastery harbored a part of the rebels. The Turkish posse however found them and killed them all, as the six monks that sheltered them were burned. Later where the stake was, six beeches grew and a healing water spring gushed forth.
In 1862 the monastery was entirely destroyed. This happened in the day devoted to the holy brother Cyril and Methodius, when the monastery celebrated its patron’s saint day and the church have gathered a lot of people. The Berkovitsa local governor Yusuf Bey broke in with his posse and killed everyone in. That way during the National Revival Period the Klisura monastery was most popular as the Desert monastery.
The first founder of the monastery Alexander Damyanov (hieromonk Antim) from Berkovitsa restored the monastery in National Revival style close to its nowadays look. Yet as a child Alexander Damyanov dreamed of devoting to God. In 1869 he built the cooking house with his own funds. Later after the Royal decree on the establishment of independent Bulgarian church (March 11, 1870) Antin built the St. Nikola and the Holy Spring chapel. Then he sent a petition to the sultan through the Exarchate to allow him to raise a temple on the place of the ruined church on the land of the village of Dervent (Klisura, Barzia). By a Royal decree dated to June 3, 1874, its construction was permitted, but only if the costs are “made by father Antim from Berkovitsa”. Then after the Liberation, in 1891 the St. St. Cyril and Methodius church was officially inaugurated by the Vidin metropolitan bishop. A few years ago, a new quite lower temple was build to the monastery – St. Nikola. Beside the two churches the complex includes three big residential buildings, a big farm and a cooking house, which encircle the lovely garden in the inner court. In 2000 in the Holy Spring of the Klisura monastery the so-called “living water” was found, coming from the Todorini kukli summit.
Thanks to the young abbot – archimandrite Antim, just 25 years old, the Klisura monastery is again operating as the connection between the Heavens and Earth, between the people and God.
As the abbot says, our strive is to attract the outer world and to make the Klisura monastery a place both for those looking for a religious loneliness and for those having to do some remote work.
The holy cloister is still a center of education, Christianity and Bulgarian national spirit. Not only are the guests rooms entirely renewed and suit for the modern lied, but a computer hall providing Internet, a Sunday school and conferences hall, as well as a library for religious and fiction literature are now constructed. This way each guest of the Klisura monastery will fell it like home. 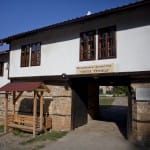 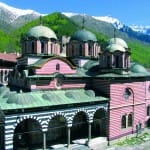