In the north-western part of the Rhodope Mountains, approximately 130 km away from Sofia and 20 km away from the district center of Velingrad, the remains of Tsepina Fortress are situated over a high rocky mountain peak . The cultural and natural landmarks of Chepino Valley, along with the picturesque landscape, turn the area of the town of Velingrad, the town of Rakitovo and the village of Darino into an attractive destination for travel lovers.

Situated along the stream of Chepinska River, Chepino Valley is the largest one in the Rhodope Mountains, being famous for its fair climate and abundance of more than 80 thermal springs. Centuries-old coniferous woods of spruces cover the surrounding mountain slopes, as the second highest peak of the Rhodope Mountains called “Golyama Syutka” stands not far from it. The road from the Upper Thracian Plain to the valley passes over the impressionable beautiful defile of Chepinska River called “Eli Dere” in the part near Karkariya Hill. According to an old legend, the defile between Milevite Skali /Mile’s Rocks/ and Karkariya was excavated by a mythical monster, and the waters of Eli Dere passed through the mountain and reached the Maritsa River.
The biggest karst spring in Bulgaria – Kleptuza, is situated into the western area of the valley in Chepino Residential District in Velingrad Resort. Two lakes are formed by the spring waters, and the pine wood to the south has been turned into a natural park – a wonderful place for a walk and a symbol of the town.

On the way from Velingrad towards Tsepina Fortress the road is passing through the village of Dorkovo. It was in the locality of Ilin Kladenets (Ilin Well) near the village where fossils had been discovered – the oldest mastodont and hyparions (three-fingered horses) discovered in Europe being dated as almost 4 million years old. A part of the skeletons of the prehistoric mammals could be seen at the paleontolo-gical exhibition in the museum in the nearby town of Rakitovo situated in the south-eastern part of the valley. It is worth paying attention to the clock tower built in the town in 1872 by the local master Malik Chelebi, as well as the underground river in Lepenitsa Cave.

The medieval Tsepina Fortress is situated over a conical peak to the north-west of the village of Dorkovo, and the asphalt road reaches the chalet at the foot of the fortress. The only way to reach the fortress is from the south; steep slopes surround the eminence from the other three directions. The stone walls on the outer side of the fortress are preserved to a height of 2.5 meters and cover an area of approximately 25 decares. The citadel of the fortress rises at the highest point of Tsepina and the tower is situated in its center – the residence of its governor. During the archeological researches of the peak there were discovered ceramic pots with the typical ornamental features of the late Roman Iron Age, as well as different tools. Those finds can be seem at the exposition in the chalet underneath the fortress and are the proof of the importance of that peak in the antiquity. The building of the fortress walls and the transformation of the rocky eminence into an unscalable bulwark took place in approximately the XІІth c. –XІІІth c. It was then when inside the stronghold area four water depositories of impressive scale and three churches were build. In the first decades of the XІІІth century the Tsepina Fortress was a center of the rule of despot Aleksii Slav who later moved his residence in Melnik. According to the legend, Isabella – the young fiancee of the despot, was buried on the nearby peak, so that the sun rays could shine upon her every morning before shining over Tsepina.
Despite its inaccessibility, in 1373 the ottomans succeeded in conquering the Rhodope stronghold, but its name – Tsepina, became the name of the entire region of Chepino. 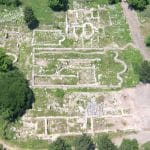 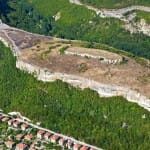