All the guests of our country have heart the phrase that Bulgaria has incredible nature. They soon believe this is true and start saying the same words after one only travel even on a randomly elected rout. Anything could be seen in Bulgaria – endless blue sea with golden beaches, high mountains with centuries-old woods, mineral springs and much, much history and legends. But even the confirmed traveler sometimes holds his breath and rubs his eyes amazed by another natural wonder. This is what you are going to feel too if you launch a tour of the northwestern part of Bulgaria. Just 52 km to the southwest of the town of Vidin and 182 km away from Sofia you will get into a place looking some kind familiar, but where from … probably from the fairytales which you have read in your childhood. This fantastic vision is the rocks near Belogradchik. Facing it you will agree the poet who says that here „the human fantasy has been robbed, totally robbed with all its caprices“.

The road from the district center Montana to Belogradchik is slightly over 60 km. Before reaching the main entrance sign the highway suddenly seems to enter into weird stone woods. Behind the branches of the roadside trees there are huge stone figures peering and while you’re trying to liken them they disappear and are replaced by new once. You can never go wrong – these are the Belogradchik rocks and the town you are about to enter is Belogradchik. The white tiled houses seem to have fused with the stone scene of fairy. Perching side by side along the small streets without breaking the surrounding harmony.
The unusual rock scenery spreads at the length of 30 km and is 15 km wide. This amazing natural phenomenon has been shaped by the ran water streaming down and the winds for 200 million years turning the shapeless stone into sculptures looking like mythical creatures, h uman silhouettes, animals, and birds.
The most impressive group is in the south part of the town where each rock has been given a name -“Madonata” (Madonna), “Vkamenenata svatba” (the Stone Wedding), “Gabite” (the Mushrooms), “Konnikat” (the Rider), “Monasite” (the Monks), “Adam i Eva” (Adam and Eve)…
The figures look so alive that one even gets sometimes the feeling as they are moving and are just about to start telling their thousand-year old centuries. And the legends for them are really countless. Most of them tell about tragic love, death and heroism and you will hardly find any citizen of the town not knowing them.
Overhanging deep precipices the red-, grey- and yellow-shaded rocks hide in them a number of caves with amazing galleries, stalactites and columns. There are small trees growing over them which happen to be over 200 year-old. The lack of humidity and nutrient substances defined their size.
On the Belogradchik’s highest part among the greenery and natural inaccessibility there is also an ancient stronghold rising. Historians believe that its foundations were built yet by the ancient Thracians who chose the place because of its natural rock protection. Later on the Romans built a fortress here and then the Byzantines also use the stronghold. In the 14th century the Bulgarian tzar Ivan Sratsimir constructed here a summer residence and used to relax here with his attendance.
The place opens a wonderful view to the western slopes of the Balkan Mountain which cross the state border and slope down as far as the neighboring Serbia.
The amateur mountaineers are eased by marked eco trails passing near some of the most impressive rock shapes. They are of different difficulty level and the routs open also the view of different plants and agrarian herbs.
Nowadays Belogradchik is annually visited by over 120,000 tourists from the country and abroad. Besides the fairytale rocks this neat small town attracts also with its easy way of life, the crystal air and the hospitality of the local people. There are more the twenty guest houses offering you to stay there and the cozy restaurants and taverns will be glad to dine you with some local cuisine specialties. 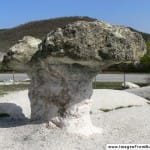